Egress fees in the Cloud market: a powerful tool to lock users in

A market study made by the Dutch Consumer and Market Authority (ACM) showed that it is especially complicated for users to switch from one Cloud service to another, or to combine Cloud services from different providers, because of the particularly high egress fees imposed by the market leaders. These excessive costs for consumers represent a significant obstacle to the emergence of a healthy and fair competitive environment, therefore to innovation in a constantly changing market. 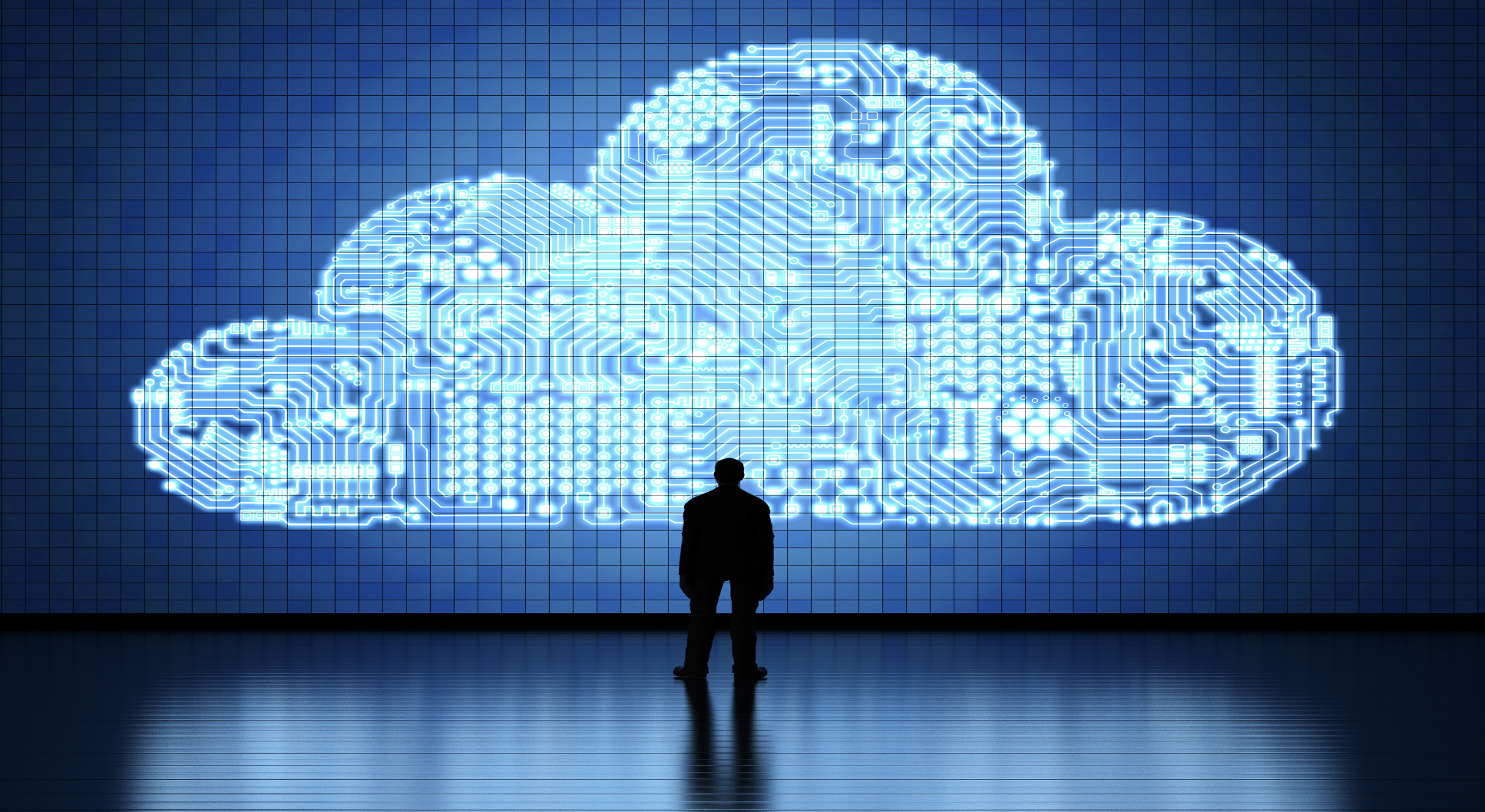 Cloud services allow companies and organizations to use high-quality IT services (such as external storage capacity and computing power) without having to invest in expensive hardware and software. Cloud providers therefore play a key role in the digitization of businesses, where data processing, gathering, storage, and analysis is nowadays crucial.

For the users of these services, a certain number of costs associated with the processing and management of their data should be anticipated and must be expected. On the other hand, additional costs are often imposed by the dominant players, such as the “egress fees”, without any real technical and economic justification.

What are the egress fees?

Egress fees are the costs charged by a Cloud provider to a customer who wishes to extract his data to another provider in the market, in order to transfer it to another provider, to process it “on-premises” or to use several providers simultaneously (multicloud). These charges apply whenever there is a transfer of data outside the network of the original cloud provider, whether it is:

– To Internet (for a complete transfer to another cloud provider)

– Between providers (in a multi-cloud logic)

Which consequences for users?

This means that customers are required to pay any egress fees charged by their former supplier, which can often be disproportionately expensive.

The ACM [1] study shows that the two largest Cloud service providers (Microsoft Azure and Amazon Web Services) each have an estimated 35-40% of the total market. In this economic environment dominated by these two American giants, it is difficult for other market players to find their place and serenely develop.

Moreover, for users of cloud services, the lack of predictability of egress fees at a given time is an additional obstacle to the free flow of data.  Indeed, these costs remain very abstract for the customer, who cannot know at the time of contracting the volume of data that he will host with the chosen cloud provider and the frequency of their transmission. The amount of fees that will be charged for a change of provider or a multi-cloud application is therefore highly unpredictable and discourages any data migration. However, there is no technical or commercial justification for billing separately for data transfer rather than integrating the marginal costs of data transfer into the data storage itself.

This situation becomes even more problematic given that the excessive egress fees for Cloud servicesincrease the market imbalance. Indeed, thanks to this dissuasive system, the American giants can reinforce their dominant positions and keep their customers choices blocked: this is the “lock-in” effect.

Beyond this dimension of excessive costs linked to the issue of data transfer, technical difficulties may appear. They concern, for example, the data interoperability, or a normative gap between countries, etc.

The European cloud services sector is very dynamic, with many highly successful European cloud players having established themselves on the European digital market. However, the healthy competition on this market is strongly undermined by aggressive commercial practices of all American hyperscalers. In particular, egress fees are an unjustified and unfair practice, which is highly prejudicial to the competitive balance that is essential to allow European players who respect our values to continue to grow.

The following infographic illustrates the differences in egress fee prices charged by some of the key players in the Cloud services market[2]. 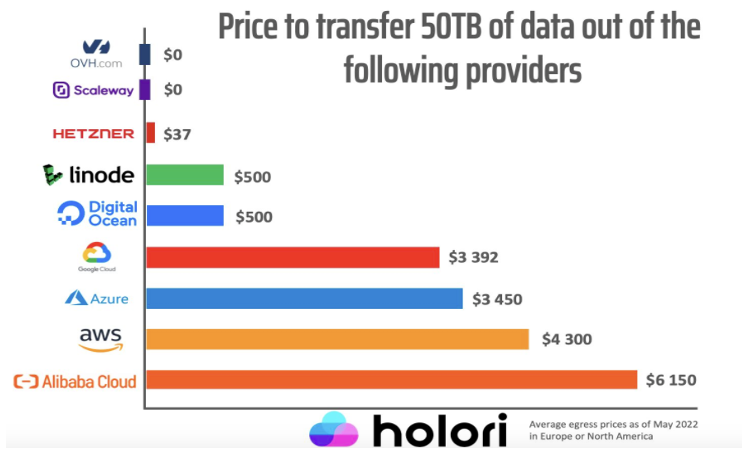 The market leaders are the ones who charge the highest egress fees. Other French players, such as OVHcloud or Scaleway for example, do not charge for this type of service.

According to a study conducted by Cloudflare in 2021[1], the profit realized by AWS on egress fees is estimated at nearly 8000% for data leaving servers located in Europe or the United States. However, the study adds that the wholesale price of data transit services has dropped by an average of 93% over the last 10 years, while the egress fees charged by AWS have only dropped by 25%.

These egress fees are even less justifiable as the cost of data transport is marginal for the cloud provider, and not directly related to the volume of data exchanged.

In conclusion, the overpricing of egress fees can only be rationally explained in terms of a desire to artificially curb the free choice of a Cloud provider.

With 60 days to go before the first round of the presidential election, the Open Internet Project (OIP), a European association of organizations and European digital industrialists, calls on all the candidates for the presidential election on the digital sites which must quickly evolve so that the Internet giants – mostly foreign – stop abusing their ultra-dominant positions, and so that a truly sovereign digital industry emerges.

Indeed, the vitiated effect of the overpowering of GAFAM, which respects neither our laws nor our institutions, and whose place continues to gain in importance, both in our economy and in our democratic and social life, is revealed everywhere: tax evasion, financing of conspiratorial sites, capture of personal and highly strategic data, looting of our cultural heritage,…

« The DMA agreement is a significant step forward, which we welcome. Thanks to this new regulation, the European rules governing GAFAM will be much stricter, in particular with the recognition of the notion of gatekeeper, and will allow European alternative solutions – often the very first victims of anti-competitive practices – to develop under more favorable conditions ! » 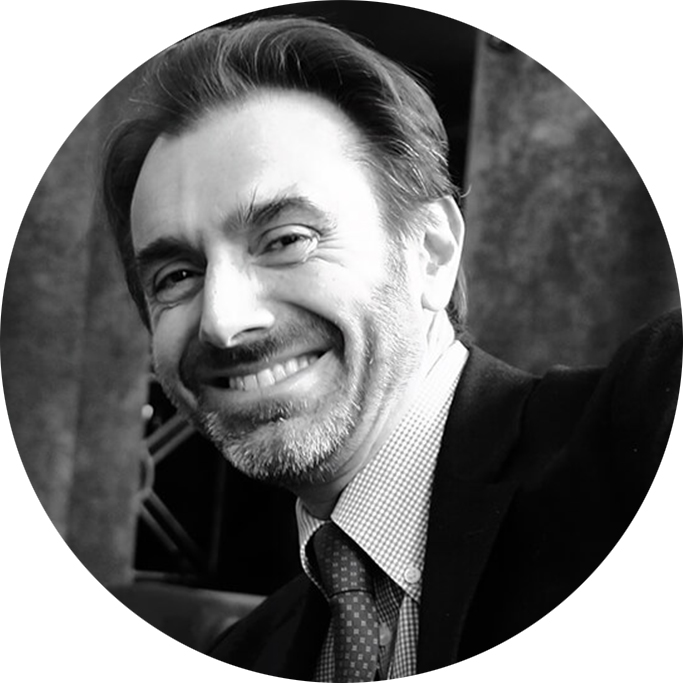 The OIP wishes to know the position of the candidates on the following proposals:

Online advertising: The European Commission opens an investigation against Google

The European Commission indeed recalls that spending on display advertising in the EU amounted “according to estimates, to around 20 billion euros”.

In France, the 220 million euro judgment against Google by the Competition Authority in June 2021 for having granted preferential treatment to its own intermediation and advertising auction management services highlights that the share of Google and Facebook’s market in the digital advertising market reached almost 75% for only 30% of the audience, while the audience share of media present on the internet (Le Figaro, Les Echos, TF1, M6, BFM, RTL, France Info, etc.) is 25% for only 10% market share.

Indeed, the media are the collateral victims of the biased competitive system by which Google has captured a dominant share of the digital advertising market, allowing it to use media content, audience and data to capture value in this market and favor its own inventories (advertising space).

Thus, on a French market of approximately 8 billion euros per year, this means that by favoring its own advertising spaces (Youtube, Google Search, etc.), Google manages through its multiple conflicts of interest and its practices of self-preferences to divert a significant share of the digital advertising market to the detriment of traditional media.

It is between 800 million and 1 billion euros that must be redirected from the duopoly (Google and Facebook) to other natural beneficiaries of advertisers’ digital campaigns. The decision of the ADLC is a decisive decision as a first step to allow this rebalancing.

The Open Internet Project is closely monitoring this issue, which concerns both adtech companies, French and European online advertisers and publishers.

Reform this essential tool in order to reduce procedural delays.

The OIP is therefore fighting for the provisional measures to be reformed.

provides that the European Commission may order interim measures aimed at interrupting a practice constituting an abuse of a dominant position, if “serious and irreparable damage is likely to be caused to competition” (Article 8 of Regulation (EC) No. 1/2003).

With this requirement of “irreparable” damage, the standards for implementing interim measures appear too high, so that this measure, although necessary, is inapplicable.

In order not to leave European companies, in particular in the very fast-paced digital world, subjected to market foreclosure practices, with no other solution than to wait for years for the litigation procedures to come to an end, it would be a question of reforming the provisional measures provided for in article 8 of regulation (EC) No 1/2003 of the Council in order to make them applicable as quickly as possible by the European Commission, but also of amending article 22 of the DMA settlement by replacing the condition “irreparable” with “immediate”.

Fight against Google’s illegal practices regarding Android mobile devices in order to strengthen the dominant position of its search engine.

On July 18, 2018, the European Commission fined Google €4.34 billion, once again for violating competition in the European market and abuse of a dominant position.

The American company was accused this time of imposing illegal restrictions on Android device manufacturers and mobile network operators in order to consolidate its dominant position in the general Internet search market. In fact, the Commission, after several years of investigation, accused Google of forcing, often through financial incentives, manufacturers of smartphones using its Android operating system to pre-install its search engine and browser (Chrome) by default as a condition to the granting of the license for its online application store (Play Store).

With this behavior, Google has deterred manufacturers from pre-installing search and navigation applications other than its own, thereby reducing the ability of competitors to compete effectively.

Google has appealed this decision.

Prevent Google from abusing its ultra-dominant position in the search engine market by promoting its own price comparison service.

In May 2015, after seven years of investigation started by Mr. Joaquín Almunia, European Commissioner for Competition from 2004 to 2014, with whom Google had succeeded in 2014 in obtaining an agreement to avoid a substantial fine – ultimately flouted by the multinational – our association decided to file a formal complaint against Google and its practices of favoritism of its own services and provided evidence as to the ineffectiveness of the search engine’s settlement proposals.

The European Commission, under its new Commissioner for Competition Margrethe Vestager, imposed on June 27, 2017 a fine of 2.42 billion euros on Google for violating EU competition rules.

Indeed, the American giant was accused of abusing a dominant position in the search engine market by conferring an illegal advantage on its price comparison service, Google Shopping. It has given greater visibility to its own price comparison service, preventing other companies from engaging in fair and transparent competition, thereby depriving European consumers of a real choice of services.

Google has decided to appeal this decision.

Regarding the remedial measures, the results are disappointing since the American company decided to set up in September 2017 an auction system supposed to guarantee fair competition. However, to appear prominently on the very visible insert of Google Shopping results, price comparators (including Google Shopping itself) must bid with Google, which remains very problematic at the present time.

The OIP continues to closely monitor the remedies proposed by Google and stresses the importance of the European Commission’s decision and its compliance.